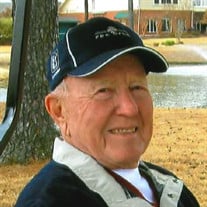 Charles Belt Owens of Morrilton, Arkansas, made his flight to heaven on March 1, 2020. His Savior was the pilot and paid for the way in full with His precious blood. He was married to Jean Winburne for 73 years when Jean passed in 2015. Their son “Toppy” passed eight months later in April 2016. Charlie is survived by his daughter Melinda Carnahan (Gary), nine grandchildren: David Owens; Josh Owens (June) children: Jordan, Belt and Sarah; Holly Sellers (Sam) children: Samuel and Will; Judy Altman (Michael) children: Scott and Josh; Elisabeth Proenza (Rick) children: Caleb, Rebecca and Noah; Daniel Carnahan (Dallas) sons: Levi and Clay; Jordan Owens (Murry) son Charlie; Natalie Baggs (Evans) sons: Elliot and Nathan; and Abby Lacy (David), sons: Owen and Eli. Charlie and Jean were blessed with 18 great grandchildren. Born on Feb. 11, 1919, Owens grew up in Texarkana and played quarterback on the high school team. He loved music and played the trumpet, clarinet and bass. He attended the University of Arkansas, but when World War II arrived he left school for a commission with the Navy. He was a test pilot and ferried planes from Long Island, NY to San Diego, California. After the war, he and Jean settled permanently in Morrilton, her hometown. Owens and his great friend, A. J. Meadors owned Central Insurance Agency until he retired. This was the perfect occupation for “Charlie” because he loved meeting and helping people and serving his community. Charlie helped start The Morrilton Lion’s Club and served as their second President. He served as president of the Rotary Club and Chamber of Commerce. He was Chairman of the Industrial Board and was appointed to Morrilton’s first planning and zoning Commission. He was a member of First Methodist Church and served as Chairman of the Administration Board that developed Little Lambs and was Chairmen of the Trustees. He was a popular figure on the golf course and played 20 plus years in the Arkansas State Golf Association Father-Son Championship. He was an avid Razorback fan and football supporter for almost 50 years. He enjoyed gardening, fishing, hunting and training his bird dogs. He slowly had to give up the things he was active in except for his friendships and love for family. He was a gift to us from God! The family thanks our faithful caregivers, Velma Wright and Evelyn Moore for their faithfulness founded on their true love for Charlie. Visitation will be Sunday, March 8, 3-5pm at Harris Funeral Home. Services will be Monday, March 9th at 10am at the First United Methodist Church of Morrilton. Please send memorials to the church or charity of your choice.

Charles Belt Owens of Morrilton, Arkansas, made his flight to heaven on March 1, 2020. His Savior was the pilot and paid for the way in full with His precious blood. He was married to Jean Winburne for 73 years when Jean passed in 2015. Their... View Obituary & Service Information

The family of Charles Belt Owens created this Life Tributes page to make it easy to share your memories.

Charles Belt Owens of Morrilton, Arkansas, made his flight to...

Send flowers to the Owens family.