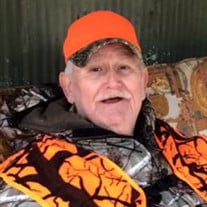 Charles Danny Loyd, age 71, of Morrilton, Arkansas, passed away Wednesday, August 21, 2019. He was born March 18, 1948 in Morrilton, Arkansas a son of Charles Damon and Mary Ethel (Bradley) Loyd. Danny was a 1966 graduate of Morrilton High School and retired from the Arkansas State Highway Department in Conway. He was an avid hunter and fisherman. Danny served his country during the Vietnam War in the Army. He is survived by his wife for almost 37 years, Carolyn Sue Koonce Loyd of Morrilton; children, Charlotte (Terry) Heaggans, Lisa (Wesley) O’Neal, both of Morrilton, Jana (Steve) Yangas of Springfield, Arkansas, and Travis (Candice) Blackshire of Fort Collins, Colorado; 15 grandchildren, Jason and Terrence (Elizabeth) Heaggans, Dawson (Abby) and Alyssa Gullett, Karman and Allie O’Neal, Nathan, Logan, and Dylan Blackshire, Jadyn, Chloe, and Landon Johnson, and Sophia, Giuliana, and Michael Yangas; and one great grandson, Cooper Mahan. Other than his parents, he was preceded in death by a grandson, Ethan Blackshire. Funeral services will be 2:00 p.m. Monday, August 26, at the Harris Chapel with Bro. Lonnie Edwards officiating. Burial will be at Plummerville Cemetery by Harris Funeral Home of Morrilton. The family will receive friends from 6:00 to 8:00 p.m. Sunday, at the funeral home.

The family of Charles Danny Loyd created this Life Tributes page to make it easy to share your memories.

Send flowers to the Loyd family.