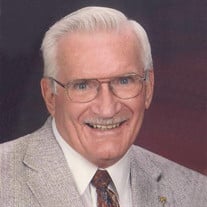 On Thursday, May 2, 2019, Charles Benson Gray, of Oppelo, loving husband, father, step-father and grandfather, passed away at the age of 86. Charles was born on May 13, 1932 in West Helena, AR to Louis and Abby (Vic) Gray. He attended Morrilton High School and joined United States Army shortly after graduation. Charles served twenty-five years and retired as a Lieutenant Colonel after serving one tour in Korea and two tours in Vietnam. He returned home and became a cattle rancher in Oppelo where he settled with his wife Rita and son Michael. Charles was known for his infectious smile, quick wit, and his kind and generous spirit. He enjoyed fishing with the kids, woodworking, Saturday night dominoes, winning at BINGO, cooking, storytelling and traveling the world. Most of all he loved his family, especially his 17 grandchildren, 58 great grandchildren and one great, great grandson. Charles was often seen on his tractor pulling a wagon load of grandkids around in his beautiful pasture. His pantry was never empty, nor the cookie jar for the kids and bubble gum was a must have in the Gray home. Charles enjoyed serving on the board of the Conway County Farm Bureau for over 45 years and was always involved in his parish at St. Elizabeth. Other than his parents, he was preceded in death by his first wife Rita Grabber Gray, second wife Nancy Bearden Gray, his brother Harold Gray and sister Eloise Gray Jones. Charles is survived by his son Michael (Jackie) Gray of Oppelo, step-daughters Juanise (David) Zimmerman of Oppelo, Nancy (Richard) Dold of Oppelo, Kathy (Lynn) Edgerton of Raleigh, North Carolina, step-sons Benny (Paula) Koontz of Morrilton, Kenny (Kay) Koontz of Salisbury, North Carolina and brother Robert Gray of Liberty Township, Ohio as well as many nieces and nephews. Pallbearers will be grandsons, Joshua Koontz, Matthew Zimmerman, Jamie Zimmerman, Paul Zimmerman, Jeremy Gray, Sean Gray and Joey Dold. Honorary pall bearers are Bryce Koontz, Scott Koontz and Ryan Gray. Rosary on Sunday, May 5th at 6pm with visitation following at the Chapel at Harris Funeral Home. The funeral service will Monday, May 6th at 10am, St. Elizabeth Church in Oppelo with Father Richard Davis officiating. Burial at St. Elizabeth Cemetery by Harris Funeral Home of Morrilton. In lieu of flowers, donations can be made to Arkansas Sheriff’s Youth Ranch, St. Elizabeth Church or the Sacred Heart Endowment.

On Thursday, May 2, 2019, Charles Benson Gray, of Oppelo, loving husband, father, step-father and grandfather, passed away at the age of 86. Charles was born on May 13, 1932 in West Helena, AR to Louis and Abby (Vic) Gray. He attended Morrilton... View Obituary & Service Information

The family of Charles Benson Gray created this Life Tributes page to make it easy to share your memories.

Send flowers to the Gray family.