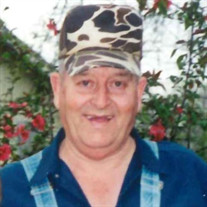 Carl Ed Grabher of Oppelo, Arkansas, passed away on Tuesday, April 20, 2021, at Arkansas Hospice Inpatient in Little Rock following injuries sustained in a house fire. He was born in Oppelo on July 26, 1940, to Albert John Grabher and Laura Lee Grabher. Carl Ed graduated from Morrilton High School in 1958 and then, after a brief stint farming and working at Arkansas Kraft Corporation, he became a truck driver. He initially hauled livestock over the road and then settled into a career of hauling pulpwood locally. He owned and operated his own trucking company until he was disabled following a stroke in ‘96. Those who were blessed to know Carl Ed remember him as a soft-spoken man of few words. Rather than being the center of attention, he was content to sit back and listen to the stories of others, always with a smile on his face. Born with a love of horses, he became a member of the Conway County Riding Club, the Arkansas Team Ropers Association, the Arkansas Cowboys Association, and the USTRC. He was also a member of the Oppelo Volunteer Fire Department, and he enjoyed hunting. One of Carl Ed’s greatest joys, especially in his later years, was the time he spent in Jerusalem at deer camp with his brother Pete and a group of their life-long friends. He looked forward to every Saturday--in or out of hunting season--when they gathered for food, fun, and fellowship. Carl Ed was preceded in death by his parents; his sister, Sarah Grabher Martin; and the mother of his children, Mary Grabher Grissom. He is survived by his daughters, Angie Saunders (Darryl) of Greenbrier and Tammy McMillen (Mickey) of Greenbrier; his brothers Otto “Bud” Grabher (Jo) of Perry and James “Pete” Grabher (Carleta) of Morrilton; grandchildren Mason McMillen, Braden McMillen, Kasey McMillen Young, and Chad Saunders; great-grandchildren Casi Wayne Saunders, Sadie Jo Saunders, Dylan Book, and Raegan Scrimshire; and many cherished nieces and nephews The family will receive visitors from 6:00 to 8:00 PM on Thursday, April 22, with a funeral service to be held at 10:00 AM Friday in the chapel at Harris Funeral Home in Morrilton. Burial will follow at Wolf Cemetery in Oppelo. Arrangements are by Harris Funeral Home of Morrilton.

Carl Ed Grabher of Oppelo, Arkansas, passed away on Tuesday, April 20, 2021, at Arkansas Hospice Inpatient in Little Rock following injuries sustained in a house fire. He was born in Oppelo on July 26, 1940, to Albert John Grabher and Laura... View Obituary & Service Information

The family of Carl Ed Grabher created this Life Tributes page to make it easy to share your memories.

Carl Ed Grabher of Oppelo, Arkansas, passed away on Tuesday,...

Send flowers to the Grabher family.