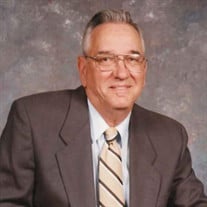 Carl Alvin Garland, age 85, of Little Rock, Arkansas, passed away Wednesday, February 10, 2021. He was born December 13, 1935 in Birdseye, Indiana, the son of Alvin Garland and Dora Rose Koch Garland. He was the widower of Sula M. Garland. Carl was an Air Force Veteran and of the Christian faith. He retired from Teletype/ AT&T after 30 plus years of service. He was an avid drag racer with the fastest foot in town and he never missed any event with his grandchildren. He is survived by his daughters, Carla (John) Jackson-Klinger of Mabelvale and Darla (Kenny) Davis of Conway; and grandchildren, Keith (Courtney) Jackson of Bentonville, Kayla Davis of Conway, and Aaron (Katie) Davis of Austin. He was preceded in death by his siblings, Vernis “Copper” Garland, Ettabell Ubelhor, Franklin Garland, Jewell Eckert, James Garland, Berdean Chappell, Rosalie Garland, and Rebecca Sprinkle. The family would like to express gratitude to his caregivers, Helen and Michael Combs. Funeral service will be 10:00 a.m. Saturday, February 13, at the Harris Chapel with Chaplain Steve Haynes officiating. Burial will be at Halbrook Cemetery. The family will receive friends from 6:00 to 8:00 p.m. Friday, at the funeral home.

The family of Carl Alvin Garland created this Life Tributes page to make it easy to share your memories.

Send flowers to the Garland family.