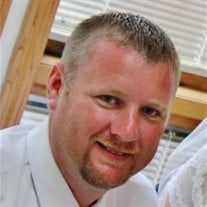 Brian Leon Spears Brian Leon Spears, 38 of Bigelow Arkansas passed away on July 27, 2019 at 3:16 p.m. after a courageous battle with colon cancer. Brian was at home where he wanted to be and surrounded by his loved ones. Brian was a loving and devoted father, husband, son and brother. He loved his family with all his heart. He always strived to give them the best life and made Madelynn and Everett his first priority. They were his pride and joy. He loved watching Madelynn play basketball and softball. He loved snuggling with her and Everett and watching Disney movies over and over. He had so many places he wanted to take them and share with them. His loving wife Kayde was his rock. He said many times he did not know what he would do without her. He loved having cook outs and pool parties with all his friends on Lovers Lane. They were life time friends that he loved and considered part of his family. They stood through this battle with him supporting and encouraging him and for this he was blessed. Brian worked for Schindler Elevator Inc in Little Rock as a mechanic. He started in the trade at 18 going to night school to get his license. He was a devoted employee through the years and gained many friends through his work that he was grateful to have. Brian was born January 18, 1981 in Morrilton Arkansas to Charles Leon Spears and Ida Marlene Wiley Spears. Brian is survived by his loving wife Kayde Spears, daughter Madelynn Grace Spears and son Everett Russell Spears. He is survived by his parents Charles Spears of Bigelow and Marlene (Tim) Whisenhunt of Guy, sister Kimberly (Justin) Burnett of Bigelow, stepbrother, Garrett (Sara) Whisenhunt of Little Rock. His Grandmother Frances Wiley of Bigelow, His in-laws Joseph and Kim Gallo of Trumann and Brent and Christy Williams of Hot Springs, brother-in law Kaleb (Jennifer) Williams of Hot Springs, and sister-in-law Kila (Chad) Owens of Jonesboro, nephews Brandon (Jenna) Burnett, Dakoda Burnett of Bigelow, Konnor, Jace, Gideon Williams of Hot Springs, Liam Owens of Jonesboro and niece Lucy Owens of Jonesboro. He will also be greatly missed by a host of Aunts, Uncles, cousins and friends. Brian is preceded in death by his grandparents Benny and Louise Spears and Everett Wiley Sr., Cousins Jennifer Hormann and Tracy Carden. Funeral Services will be 2:00 p.m. Tuesday, July 30, at Anne Watson Elementary School Annex with Bro. Jeremy Williams officiating. Burial will be at Wye Mountain Cemetery by Harris Funeral Home of Morrilton. The family will receive friends from 4:30 p.m. to 6:30 p.m. Monday, July 29 at Harris Funeral Home in Morrilton.

Brian Leon Spears Brian Leon Spears, 38 of Bigelow Arkansas passed away on July 27, 2019 at 3:16 p.m. after a courageous battle with colon cancer. Brian was at home where he wanted to be and surrounded by his loved ones. Brian was a loving and... View Obituary & Service Information

The family of Brian Leon Spears created this Life Tributes page to make it easy to share your memories.

Send flowers to the Spears family.