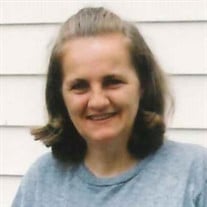 Brenda Lee Garrett Hulsey, age 63, of Perryville, Arkansas, passed away Saturday, February 6, 2021. She was born August 1, 1957 in Peculiar, Missouri, a daughter of Aubrey Pershing Garrett, Sr. and Thelma Underwood Garrett. She was of the Baptist... View Obituary & Service Information

The family of Brenda Lee Garrett Hulsey created this Life Tributes page to make it easy to share your memories.

Send flowers to the Hulsey family.