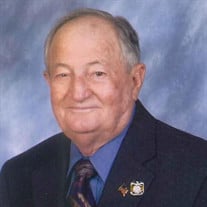 Billie Charles Wofford, age 90, of Morrilton, Arkansas, passed away Friday, September 20, 2019. He was born April 16, 1929 in Walters, Oklahoma, a son of the late Charles Wofford and Bernice Poteete Wofford. He was a retired School Administrator,... View Obituary & Service Information

The family of Billie Charles Wofford created this Life Tributes page to make it easy to share your memories.

Send flowers to the Wofford family.