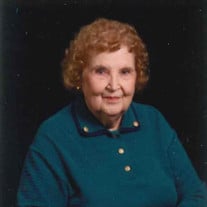 Betty Sue Henry Looney, age 95, of Morrilton, passed away Sunday, May 3rd , 2020. On January 3rd, 1925, better known later as “Aunt Betty,” was born in Atkins, AR to Mamie Boggess Henry and Alexander Reese Henry. Betty finished Atkins High School in 1942. She married Ben Looney, Jr, in 1946, and they made their home in Morrilton. She was a faithful member of First United Methodist Church in Morrilton. In fact, she was a lifelong Methodist. Betty was a charter member of the Group 4 Circle, now known as the Emily Oates Circle. She served in many capacities in Circle. She also taught Sunday School for several years in the Junior Department, and she worked with the Methodist Youth Fellowship. She served on the Kitchen Committee for ten years. Aunt Betty was on the committee that began Mother’s Day Out, served on its board, and worked in the program. Last year, Aunt Betty received a Mission Recognition Award from the First United Methodist Church. In the summer of 1957, Judy Janes, her niece, came to live with Aunt Betty and Uncle Ben. Judy called their house her home until she married. Aunt Betty was the sponsor of the high school sorority, Tri Gamma, for two years when Judy was in high school. Betty worked as a secretary for many years. She was the first Administrative Assistant for Sara Gordon when she began the first Conway County Community Service in the Conway County Courthouse. The year that the Morrilton School District started a public kindergarten, Betty worked with Linda Carruthers, Jeannie Gray, and Charlotte Heidenreich at the Cox house helping the children and teachers. Later, she worked as an Aide at West Side Kindergarten, retiring when she was 70. Aunt Betty started college at Arkansas Tech part time the same year that her niece, Judy, started at Arkansas State Teachers College (now UCA). Over the years Betty accrued enough hours to be classified as a Sophomore. In 1980, Betty began teaching a Manners Class every spring on Saturdays for young ladies. Many young women remember these classes and the lessons they learned. One year, she had a class for young men. Betty was a member of Literary Coterie; V.F.W. Auxiliary, where she served as District President; T.O.P.S. 409; and Oppelo Twilite Homemakers Extension Club. As a young woman, she was a member of Beta Sigma Phi, a service sorority, and was selected as the Girl of the Year. In 1993, the teachers at Kindergarten encouraged Betty to enter the local Beauties and Beaus Christmas Pageant. As a result, she won her division and was crowned the Senior Citizens Ms. Christmas Queen. In 2013, Betty received the Arkansas River Valley Region Hall of Fame for Conway County Tourism Award for her work helping to entertain the ladies who came for the annual Car Show on Petit Jean Mountain. Her husband, Ben, preceded her in death, as did her parents and her sister, Nina Gene Henry Janes, Judy’s mother, as well as two infant sisters, Anna Jane (Nina Gene’s twin) and Nelda Belle, who was about a year younger than Betty. Betty is survived by her niece, Judy (Hall) Calhoun of Oppelo; her great-nieces, Lynn (Barb) Calhoun of Alberta, Canada and Leeann (Mickey) Mobley of Oppelo; and the lights of her life, her great-great nephews, Evan and Will Mobley of Oppelo. She is also survived by her sister-in-law, Charlene Looney of Little Rock; nieces, Doylene Adair of Plumerville and Glay Jones of Benton; nephews, Wynn Looney and Randy Looney of Little Rock; and great-nephew, Steve Adair of Plumerville. Donations in her memory may be made to First United Methodist Church, 210 S. Chestnut Street, Conway County Community Service, P.O. Box 679, Conway County Public School Foundation, P.O. Box 318, all in Morrilton, AR 72110 or to a favorite charity. Because of Covid-19 restrictions, a private graveside service will be held. The family appreciates the staff of Perryville Nursing and Rehab and Kindred Hospice for their care, especially in Aunt Betty’s last days.

The family of Betty Sue Henry Looney created this Life Tributes page to make it easy to share your memories.

Send flowers to the Looney family.