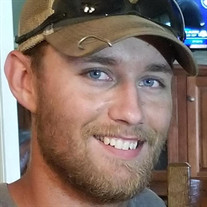 Austin Edward Parker, of Bigelow, passed away on Wednesday, July 29, 2020 at the age of 24. Austin was born on November 23, 1995 in Conway, Arkansas, a son of Jason Edward Parker and Tracie Lane Buerer. Austin graduated from Bigelow High School in 2015 where he played football, was involved in FFA, and learned to be an expert welder. Austin worked for the Perry County Road Department for the past three years. Austin had a very strong work ethic from the time he was a little boy. He would often prefer to work than to spend time playing. Austin carried that admirable work ethic into adulthood doing anything to help a friend or family member and, most important to him, to provide for his daughters. Austin always did the hard jobs with a cheerful attitude and happy heart. His bright blue eyes could light up a room, and his infectious smile and laugh were contagious. His sweet, kind heart was evident in his readiness to always lend a helping hand. Spending time with his family and friends was important to Austin, and he loved to joke around and make people laugh and feel loved. Being outdoors was a love of Austin’s, and he was an avid hunter and fisherman. He is survived by his daughters, Emma Rose and Melanie Grace, both of Bigelow; father, Jason Parker of Bigelow; mother, Tracie Lane Buerer (Doug) of Vilonia; sisters, Chyanne Parker of Guy and Beth Roper (Joey) of Vilonia; brother, TJ Kinney (Brittany) of Conway; grandparents, Charles and Becky Latture of Houston, Johnny and Lynn Parker of Houston; friend, Kirstyn Jernigan of Bigelow, and a host of aunts, uncles, cousins, nieces, family and friends who will cherish his memory. He was preceded in death by his grandparents, Buddy and Carolyn Lane. In honor of Austin’s easy going and laid back personality, the family requests attendees wear a red shirt and jeans, as that is what Austin most often wore. A graveside service will be 3:30 p.m. Monday, August 3, at Volman Cemetery with Pastor Jeremy Williams officiating. The family will receive friends from 6:00 to 8:00 p.m. Sunday, at the funeral home. Pallbearers are Josh Parks, Ben Clark, TJ Kinney, Joe Hooten, Brandon Burnett, and Blake Hoyt. Honorary pallbearers are workers for the Perry County Road Department.

Austin Edward Parker, of Bigelow, passed away on Wednesday, July 29, 2020 at the age of 24. Austin was born on November 23, 1995 in Conway, Arkansas, a son of Jason Edward Parker and Tracie Lane Buerer. Austin graduated from Bigelow High School... View Obituary & Service Information

The family of Austin Edward Parker created this Life Tributes page to make it easy to share your memories.

Austin Edward Parker, of Bigelow, passed away on Wednesday, July...

Send flowers to the Parker family.