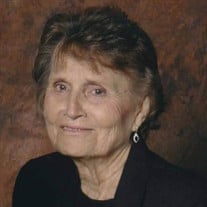 Anna Nell Howard Brown, age 94, died September 23, 2021, in Perryville, Arkansas. She was born January 6, 1927, in DeBerrie, Arkansas to Jess and Maude Moore Howard. She married William Wilburn Brown on January 27, 1945. They remained married 67 years until his passing in 2012. She lived most of her life in DeBerrie. She was a long-time member of the Aplin Church of Christ. She is survived by four daughters, Barbara (Troy) Delk, Virginia (Homer) Chitwood, Deborah (Alvin) Bowie, and Karen (Doug) Brandon, all of Perry County, two brothers, James (Patricia) Howard of Plainview, Arkansas, Stanley (Mary Ann) Howard of Nimrod, Arkansas, 10 grandchildren, 20 great-grandchildren, and four great-great-grandchildren. Besides her parents, she was preceded in death by a daughter, Tammy Brown, three brothers, Dennis Howard, Mack Howard, Ricky Howard, one sister, Norma Dean Howard Bruck and two great-grandchildren. Anna was a homemaker and a farmer. Having grown up during the Great Depression and being the first daughter in the family, Anna developed a strong work ethic. She hoed cotton, grew and harvested corn, plowed fields with mules and later tractors, and hauled hay, while raising five daughters, and managing the household. She later also worked at Levi in Morrilton for several years. She could dissect a pair of Levi jeans, telling you everything that was perfect about them while also pointing out any flaws they might have. She was an expert. Anna loved to sew and made most of her daughters’ clothes. When her daughters were young, flour came in fabric sacks that was decorated so that it could be used to make crafts and clothes. She made shirts for her kids to wear from the sacks that were actually beautiful. She also loved to quilt and made her children and grandchildren quilts that she gave them as gifts. She even taught her oldest grandson to quilt when he was small. She kept him during the day while his mother was working. As a teen he made a quilt that later was entered in the fair (unknown to him) by a relative as a joke. The quilt won a ribbon. She loved canning vegetables, cooking, gardening, working in the yard. Anna grew a monstrous sized garden every year. She raised the family food in that garden and used the available free labor provided by her daughters to make sure everything was canned or frozen for later use. Unknown to her a few of the beans, and corn mysteriously were hidden deep in the piles of empty shell or piles of husks. Summers at the Brown house were always interesting. You could always count on her having homemade biscuits on the table or left on the stove whenever you stopped by for a visit. She had her own recipe in her head, not on paper, and she eyeballed the ingredient amounts. She never used measuring cups or spoons. Wilb loved her biscuits but referred to them as catheads. Her pies –especially coconut and chocolate were the best. Sweet tea, really sweet tea, was always available. Anna served corn to her family that had been grown in her garden at every get together. It was the most fabulous tasting corn there ever was and there were never any leftovers. Anna always hosted her family at holiday time and on many other occasions. The crowds were large, the food was fabulous, and the group was loud so it was good that her home was in the country. Anna loved animals. She had different pets along the way. Among her favorites was her deer and her dogs. She always loved hunting and fishing, but her hunting views changed somewhat after she became the adoptive mother to a fawn named Bambi. They became inseparable. As Bambi grew older and stronger, she loved to sneak up behind Anna as she was hanging the laundry on the clothesline and butt her in the back. Occasionally, the butt would make Anna fall forward on the ground so Anna learned to be very observant as to where Bambi was. Anna’s last two dogs were Millie and Chigger. Millie had her very own full-sized recliner in the living room. Chigger was Anna’s shadow. They were even bed partners. Anan made sure Chigger never got hungry for bacon – always sneaking her some when no one was looking. Millie is no longer living, but Chigger will be telling Anna goodbye at the cemetery after the funeral. Funeral services will be 11:00 a.m. Tuesday, September 28, 2021, at the Aplin Church of Christ with Charles Smith and Bill Green officiating. Burial will be at the DeBerrie Cemetery by Harris Funeral Home of Morrilton. The family will receive friends one hour prior to the service at the church. Pallbearers will be Ashli Delk, Stacy Delk, Nicole Strecker, Jamie Chambliss, Stephanie Brown, Jennifer Jones, Amy Hunt, Kari Farnam, Bradley Roland, and Jason Roland. To send flowers or a memorial gift to the family of Anna Brown please visit our sympathy store or donate to the Alzheimer’s Association or the DeBerrie Cemetery Fund.

The family of Anna Nell Howard Brown created this Life Tributes page to make it easy to share your memories.